My wife, Lura Wilcox, is going to be published soon in a short story anthology titled Romancing the Story. Her story is called “Soul Call”. In the most recent cover they’ve shown us, her name is centered at the top. I am prouder than words can say.

In the course of making several characters and actually getting to play a session, I modified my original character sheet and made a couple of adaptations for specific purposes. As always, these can all be downloaded from my Scribd library, from the links below or on my Downloads page.

For the original I adjusted the placement and spacing of the top matter. My writing is fairly small, yet I still had trouble squeezing a few things into the space available. I also put the associated attributes and a space for the total modifier beside each skill. We use the first public playtest’s idea of disconnecting attributes and skills, but since most people play by RAW (Rules As Written), it occurred to me that I should include those. 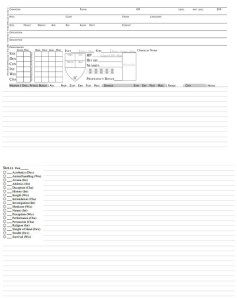 The first adaptation I made is customized for spellcasters. I moved the skill list to the former Character Notes section of the front page. Then I replaced the now-empty back page with my grimoire. That way the various spellcasting classes don’t need two sheets of paper until relatively high levels. You could also print page 1 on both sides of a sheet of paper, and thus get two characters per page; useful if, like us, you tend to make multiple characters for D&D Encounters.

Speaking of the grimoire, I made two fairly minor changes to it. After realizing that not every spell needs the full space I provided, I halved the row height and then lightened the lines between ever other row. The result is that spells that need the full space still have it, but if some of your spells don’t need that much space you can fit more of them to a page.

The final version is specifically designed for pre-generated characters. For it I simply copied the top section of the first page of the mage sheet halfway down the page, then filled the back page with just the guidelines. I did that so we could fit a character onto half a sheet of paper, partly to save paper and ink, but mostly because that’s all the space a pre-gen really needs.

Unless otherwise noted, this blog's contents are licensed by Frank Wilcox, Jr (fewilcox) under a Creative Commons Attribution-ShareAlike 4.0 International License.